The last 96 hours in Nepal went like a flash. Actually, I’m lying, it dragged out like 2nd period French and by the time we got to the last 12hrs we were both ready to leave the dust and noise behind.

Below are the highlights of the last few days of our time in Nepal.

After the yoga retreat we moved to another area of Pokhara which was called Lakeside. Our hotel was centrally placed and right by said lake with spectacular views of the Annapurna range. We had 3 things on our list:

The International Mountain Museum turned out to be a great way to spend a couple of hours. It was a 20 min ride from the hotel and in a scruffier part of town, but the museum itself tracked mountaineering in the immediate area as well as Everest with details of mountain tribes, equipment used and the flora and fauna of the areas. 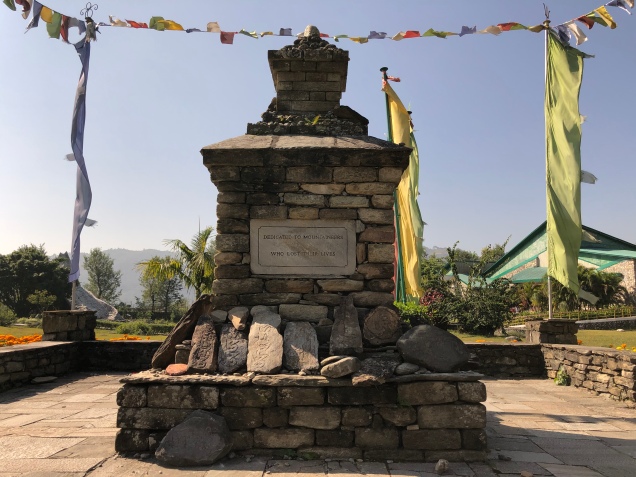 The Spa visit was more of a win for Trey who had a deep tissue massage and a pedicure from a very capable women. My lady, I believe was a trainee who had watched someone on YouTube give a pedicure, once, possibly a while ago. She didn’t seem comfortable with a nail file and was a little heavy handed with the clippers. Still, I left with all my toes and some nails so it wasn’t all bad.

For the cooking class, we had wanted to learn how to make Daal Bhat (lentils and rice) as well as Momo’s (dumplings) and were all set to take a class with a local lady who gives the proceeds of these classes to a children’s home that she works at (I am a sucker for this kind of thing so naturally I chose this) when at the last minute it was cancelled and we were paired with a guy who could do one dish but not both (he also worked for a children’s home so our money was going to a good cause). So we had a dilemma! Momo’s are complex to make but are a one trick pony of a dish whereas with the Daal, you also get to make curries which is a staple and can provide the base for many other options…. ahhhhhh dilemma.. In the end we went with Momo’s and turned up on time eager to learn the magic.

Now, I know that you will be surprised to hear that this class was not well organized or managed (it was late to start, with no recipes to follow, and no measuring of ingredients: all the factors that irritate and make it hard to replicate) but we stayed the course and learnt some crucial folding techniques which make you look like a pro so I guess I should stop whingeing. We left the class with full stomachs and the promise of the recipes by email later that evening. Amazingly, they came the next day with detailed measures. My advise for you is if you want to do a lesson is to shop around before you book and check the number of reviews.

From Pokhara we travelled to Kathmandu. We had two options for travel: 10 hours by bus or 22 minutes by air. Ha – you expect me to travel again by bus in Nepal? We flew. It was glorious and we even had time for a drink and a bag of nuts in the air before we landed.

Kathmandu: Oh boy we were ready to leave at this point. Kathmandu is a giant dust bowl of noise, fumes and rubbish. I’m sorry if this comes across as negative but I really struggled to find one redeeming feature of this city apart from the fact that we were reunited with the rest of our luggage after a month of wearing hiking gear (it hadn’t been lost, we packed what we needed for Khudi and stored the rest in Kathmandu). However the thought of getting changed and getting more clothes covered with more dust seemed like a bad idea so we stayed for in our hiking gear for another 24 hours until an hour before we left for the airport. 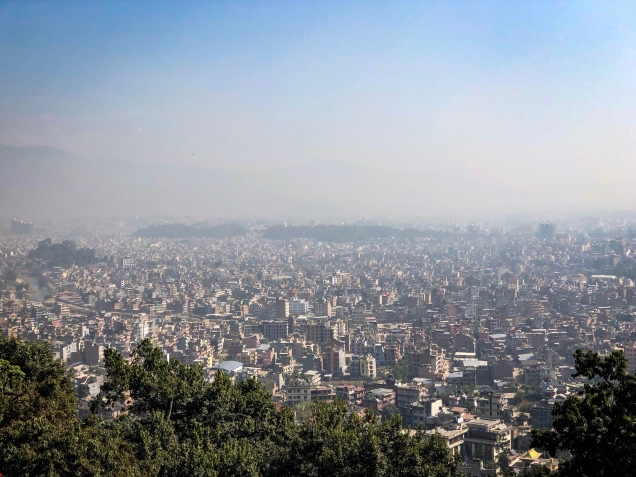 We spent most of our time in the Thamel area of the city (a 30 min walk from our own guest house) which consisted of outdoor shops (some legit, most knock off), trekker guest houses and Internet cafes. The area was *somewhat* sheltered from cars so gave us a reprieve from the fumes. It also gave us a place to fine tune our research and book the next stage of the trip.

Final comment: Our last 24 hours was an anticlimactic end to a month which earlier had given us a rural homestay in Khudi, amazingly generous hospitality from our host family, stunning views and unbelievable trekking on the Annapurna Circuit, great yoga, great new friends and fabulous food. The month was a game changer.

Between the highs and lows of the month, We choose to focus on the above nuggets of goodness instead of the dust and chaos of the final 24 hours.

The real final comment: Space Invaders: You thought I’d forgotten about them. We found a couple of them in the Thamel district of Kathmandu but my app wouldn’t recognize them (shitty GPS) so we will take it up with the app just as soon as we get back.