Trek started through the village and traversing around the mountain and then down through woodland. We approached a series of prayer wheels followed by another suspension bridge before our steep ascent of 400m to the village of Ghyaru. The ascent was all steep switchbacks on dusty exposed paths.

At the top the wind really picked up and we switched out to wool hats and jackets.

The view of the range was spectacular and we were able to see a broader scope of it with our elevation.

We noticed the altitude on the hike. Harder to climb, shorter breaths. I had started to take diamox two days previous so it helped a lot but we still felt it.

At our turning point we paused to take in the view and the past five days and we’re both grateful and lucky to have had the opportunity. We’ll be back to complete the whole circuit but climbing to 3730 mt (over 80km) in 5 days (about a 3rd of the circuit) is not bad for a last minute idea. 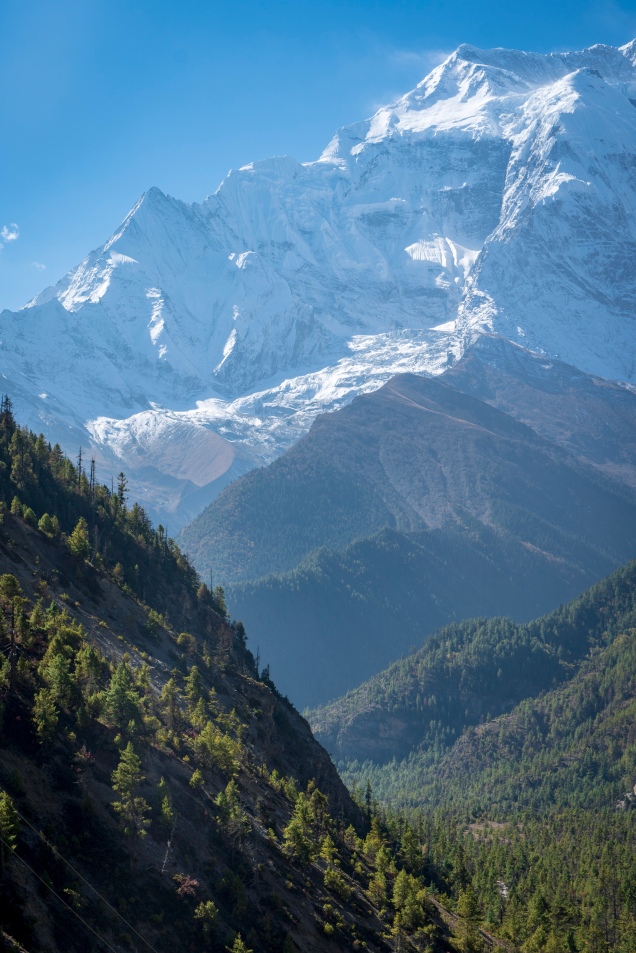 It’s starting to get colder now. Today started with a high of 8 deg C but was very hot in sun.

First section long climb over 2 hours including a walk through cliff face with a narrow road carved into it.

Generally we had mixed terrain from dusty roads to forest walks- it was a nice blend and kept it interesting.

The village of Bhratang was interesting. This area of the Menang province is known for apples and as a result the village had created a Sonoma-esque farm shop and coffee bar for the hikers. After walking through humble shacks previously it was jarring to see a glass fronted coffee shop selling apple donuts and espresso. I did not partake.

Next section was steeper followed by a forest amble before opening up into a mellow woodland path.

Ahead of us was this huge mountain of smooth rock which served as a backdrop to a small village where we grabbed some lunch with a couple Kiwis we’d just met.

Balance of trek was very desert like with dry arid land.

Reached Upper Pisang and looked for the hotels that CD recommended.

Today’s was a straightforward route: no cows, some horses but nothing dangerous.. Great morning views of the Annapurna from the guest house. The scenery got more dramatic the higher we got (kind of obvious, but still worth noting). There was a nice forest section away from the road – with less noise and less dust plus a few bridge crossings on remainder of the route – some low, some high.

Previous weather had been 20-25deg C now today it dropped to 17deg C with a cool breeze. Good to get the rain shells out.

Walked through some waterfalls on the path.

Got to Royal Garden Hotel as per referal and scored a room with en suite for 500 – Santi did not let us down -the hotel belonged to her nephew.

We met up with the Dutch couple again and also a couple from SF who just started the hike.

The next hour saw us climbing high up on those narrow steep paths that T loves so much. The route was also used for cows, goats and horses so it was common to have to navigate around animals on a path two feet wide.

On this occasion we found ourselves behind three cows. After introducing ourselves (they were facing the opposite direction so we talked to their arses) I took the right side and stayed uphill trying to dodge past and avoiding scaring them and causing them to kick.

Trey, took the inside route by the sheer drop to try and pass. Can you see where this is going?

As he did this, the black cow looked at him pushed his horns into T’s stomach and lifted him up pushing him off the hillside.

I was too busy avoiding the cows arse to see this but when I looked up T was gone. Split seconds later he popped up from the side of the hill after grabbing hold of some bamboo on his way down. Lucky for him there were some trees in this section as the drop was several hundred metres down.

We followed this up with a terrible lunch at Karte. 1220nrps $10 of momos (dumplings), Tibetan bread with omelette – super oily, tea and water). Certainly not worth crossing the suspension bridge for.

That night stayed at Hotel Snowland which was one of the many tea houses lining the route in the village. – we were offered a free room if we ate dinner and breakfast there. We had hot showers, double bed with blanket.

We met a lovely Dutch couple who we would meet again along the route. It’s not unusual to see people multiple times since it’s a popular route and many walk the same pace and stop in the same places.

A lady called Santi owned the hotel and she recommended us a hotel in Chame so we’d be set for the next night.